One Unique Thing
Because a distant ancestor of mine was a werewolf, I can speak and hold conversations with wolves and large dogs. They love me.

Where Are Your Gods Now? - Once per battle in which your foes include a cleric, shaman or druid, deal 5 points ongoing damage to any target you hit with a natural even attack roll as a free action. A normal save 11+ ends the damage.

Rid Me of This Meddlesome Cleric - Hater of Priests is an assassin’s blade, and with 1d4 hours of ritual preparation, you can consecrate it to be especially deadly to one specific cleric, shaman or druid whose true name you know. After consecration your melee crit range expands to 17+ when attacking that person.

Quirk - I think you can guess what Hater of Priest’s quirk is.

Izilomo’s Powers
+1 attack bonus vs. enemies attacked by master or engaged with master. 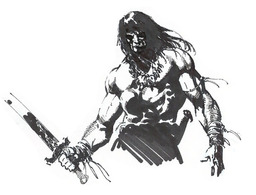